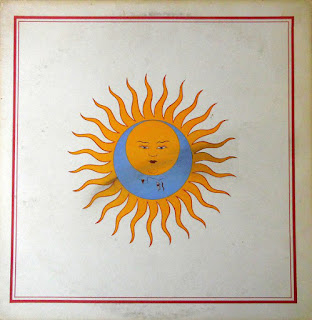 This time on Beast in the Maze, we're finishing up our journey outside the maze with a look at a classic progressive rock album by the legendary and complicated King Crimson.

The first of a trilogy of albums released with the same lineup (the other two being Starless and Bible Black and Red), the album replaces the woodwind/brass sounds heard on previous records with an all-string and percussion setup featuring violin alongside some interesting things like sheet metal and thumb pianos.

Sometimes soft, sometimes heavy, always a step ahead of their own listeners, this album manages to rule while somehow remaining an enigma - on more than one occasion we found ourselves wondering exactly what instrument was producing a given sound on the album. It's also lyrically sparse, and much of its high-brow content comes from the music rather than the lyrics, which only appear on half of the album's six tracks, which are bookended by a two-part title track.

Join us as we discuss the band, the album, what's being hit by what, and much more, wherever you get your podcasts or on our built-in player on this site. As always, we bring up lots of other musicians and things from popular culture, including:

And of course, we wouldn't leave you without a couple of live picks, so here they are!

1. The Talking Drum > Larks' Tongues Pt. II This one is from the 1990's lineup of the band, but the songs are from the Larks' Tongues album. This is one we discuss on the podcast... what are those things taped to the bass player's fingers!?!?

2. USA This is an improvisational number by the Larks' Tongues lineup of the band. The USA live album gets mentioned on the show, and this track in particular showcases bassist John Wetton. Excellent stuff.

We hope you'll join us, and that you enjoy the show and the live picks. Next time on the show, we'll be returning to our normal format and taking a look at a classic Iron Maiden album from the band's golden era, which some contend is their best. Cheers, and stay heavy.