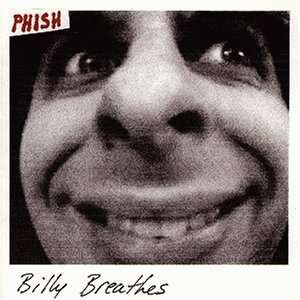 Welcome back to the Maze! This time, we're tackling Phish's sixth studio album, Billy Breathes. Featuring a much different sound than its predecessor, Hoist, this album represents the band departing from the collaborative LA production present on the previous record in favor of a return to songs built from improvisation and far fewer guest musicians.

Lyrically, many of the songs on the album were initially conceived by the Anastasio/Marshall songwriting duo during a vacation to the Cayman Islands, including the enigmatic "Character Zero," supposedly inspired by a DJ who was local to that area. There are of course exceptions for the obligatory Mike and Page songs ("Cars Trucks Buses" and "Train Song"), the string-heavy instrumental "Bliss," and the title track, which was inspired by the birth of Anastasio's daughter.

Join us for the episode as we take on the tracks one by one as well as discussing the cover art (you really can see right up Mike's nose), the new production which was recommended by fellow musician Dave Matthews, and much, much more! We also bring up loads of other bands in the course of our discussion, including Jethro Tull, Hank Williams, Green Day, The Meat Puppets, and several others.

As always, we've got a couple of live picks for you as well:

First, we're doing a callback to our "Phish at Hershey Park" episodes - which was when we first ran into the song "Theme From the Bottom." We compare that version with the studio version briefly, and in case you'd like to do the same, here it is again!

Also, one of the tracks from the album which is arguably one of the more "famous" Phish songs is the closing track, "Prince Caspian." Here's an audience-recorded version from 1997.

We hope you enjoy! Catch us on your favorite podcast app, or listen on this very website. As always feel free to contact us here or at mail@beastinthemaze.com