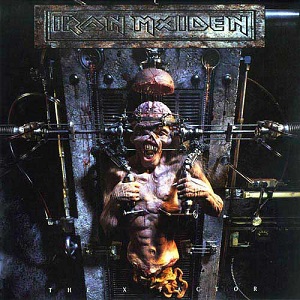 This week on Beast in the Maze, we're taking on one of the more difficult, personal, and oft-dismissed albums in Iron Maiden's history. After the departure of longtime member and guitarist Adrian Smith in 1990, followed by powerhouse vocalist Bruce Dickinson in 1993, many were left wondering if the band could soldier on. This, combined with turmoil in his personal life, meant that the shit was really hitting the fan for bassist and band leader Steve Harris.

Featuring new (and lower-register) singer Blaze Bayley, the album ends up as a dark, moody, sort of brooding record, dominated with themes of introspection, shaken faith, and war. Few of the songs featured on the album would remain in rotation after Bruce's eventual return to the band, one notable exception being the eleven-minute epic "Sign of the Cross," which the band purposefully placed as Side 1 Track 1 on The X Factor.

While it's of course true that Iron Maiden without Bruce and Adrian is not quite, or even really nearly, the same, we here at Beast in the Maze believe in giving all music a chance prior to dismissing it. In fact, that's basically most of the reason our podcast was created! And while many may not find this to be the best, or even in their top 5 favorite Maiden albums, there are definitely things of value worth defending on the record.

With us again is our good friend and colleague Jonathon from the New Ears and Bite of Passage podcasts to offer a fresh take as someone who hasn't been as deep in the Maiden/Phish trenches. Join us as we go through the tracks and give our thoughts on the first album of the Blaze Bayley Maiden era!

To add to the experience, as always, we've provided some helpful links:

1. The album Live Fast Die Fast by Wolfsbane, from 1989. This was Blaze's band prior to joining Maiden and has some interesting tracks, from punk to ballad and in between. Worth a listen!

2. A segment on the X Factor launch party, from "Headbangers' Ball" on MTV. pretty cool stuff, even if just for the nostalgia of when MTV was relevant.

Hope you enjoy the above material, and the episode. Cheers!