Coming up next: "The Story of the Ghost" with friends 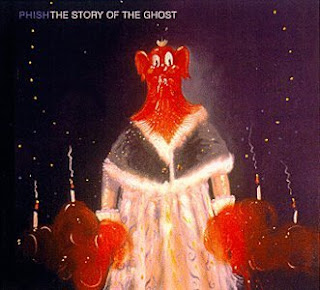 On the upcoming episode of Beast in the Maze, we're going to be taking a look at Phish's seventh studio album, The Story of the Ghost. And we brought a friend! Our pal Jonathon from the New Ears and Bite of Passage podcasts will be joining us to triple-team this thing.

Recorded in New York in a process of extended jam sessions, this album certainly has a feel all its own compared to what we've dealt with so far on the podcast. As it contains only songs either credited to the Anastasio/Marshall duo or the entire band, there are no "Page Songs" or "Mike Songs" here. Additionally, this is the first studio album we've taken on for which many of the songs hadn't been kicking around in live setlists for a few years prior to being put down on a proper album.

Tonally, the album has a more laid-back feel which is consistent across most of the tracks - the band describes it as "cow funk," something of an effort to highlight the presence of funk influence while avoiding direct comparison to funk music itself.

We encourage our listeners who aren't already familiar with the material to of course listen to the album before hearing the episode, but of course this isn't totally necessary. And if you'd like even more links to click on, how about these?

First, Some live picks! Phish took a short break while recording the album and played some live shows, which has been dubbed "The Island Tour." Here's a version of Birds of a Feather as well as a version of Shafty from early April 1998 to check out, played around the same time they were being laid down in the studio.

Next, our guest's podcasts! First, there's New Ears, an excellent monthly album podcast, the goal of which is not just to explore albums from a vast and diverse array of artists and genres, but to get at the question of what makes an album an album, rather than simply a selection of songs. In particular, we'd like to point with enthusiasm to the episodes that we ourselves have appeared on! In Episode 2, Matt joins Jonathon to discuss the album Yank Crime by post-hardcore band Drive Like Jehu, and in Episode 6, Brian comes on to talk about hip-hop classic People's Instinctive Travels and the Paths of Rhythm by A Tribe Called Quest. You can find links to those episodes on the New Ears website or by searching your favorite podcast app.

The other (much different) podcast Jonathon is involved in is Bite of Passage, which debuts later this month. It's a project in which three and a half creative writers offer their takes on the Twilight series, which not all of them even like! Explore guilty pleasures, love/hate relationships, hate/hate relationships, comedy where none was initially intended, and the nature of fandom. The teaser episode can be found here, and is also in the New Ears feed.

Enjoy! That should be plenty of content to keep you busy until we see you in a week, on Beast in the Maze.