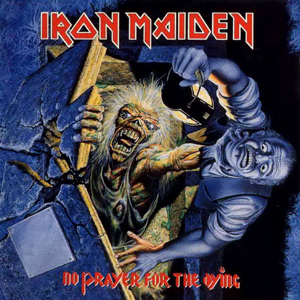 Coming up on the podcast, we'll be taking a look at the beginning of a controversial period for Iron Maiden - and metal in general - the 1990's. Iron Maiden kicked off the decade with the release of their eighth album, No Prayer for the Dying. Coming off the heels of their complex concept album Seventh Son of a Seventh Son, the band decided to take a step backwards, and simplify things, stripping away much of the production and the higher-brow approach to songwriting, the move was controversial, both within the band and without.

While it's true that many original fans didn't quite know how to digest Maiden's late 80's records due to the addition of things like guitar synth and keyboards, time and the critical community have vindicated Seventh Son, which is almost universally considered a classic of metal. No Prayer, though, is a different record.

While it's possible the approach to the album came out of a simple desire to revert to a "back-to-basics", "Street Maiden" sound and feel, it could also have been push-back against (or rather, accomodation of) criticism from old-school fans who weren't as on board with Maiden going in a progressive direction. The third option, of course, is that the band wanted to relax and do something more from the hip, especially in wake of all of the intense touring and recording they'd done for the last 10+ years.

Whatever the reason, it's clear that not everyone in the band was on the same page, or had the same motivations, as Adrian Smith left the band during the recording sessions for the album. Seemingly, he had a desire to keep pushing the band in an intellectually driven, prog-rock direction, which was certainly at odds with No Prayer for the Dying. Replacing him was guitarist Janick Gers, who had worked with Iron Maiden's vocalist on his solo album earlier in the same year. That record, Tattooed Millionaire, shares much with No Prayer both in the attitude of "let's just record this to have fun as a band and play some tunes" and the overall sound.

For better or worse, Iron Maiden was changing. But some cracks were beginning to show, and on some levels this album represents the sound of a band who didn't exactly know its own identity and was simply keeping the ball in the air, and Bruce Dickinson leaving the band after only one more album, giving way to the Blaze Bayley period. This isn't to say that the record should be dismissed - it is an Iron Maiden record, after all, and there is still much here to be enjoyed. Some new guitar sounds being phased into the band's overall sounds begin to emerge here, and of course the record is loaded with excellent guitar solos. In keeping with Iron Maiden tradition, there are the obligatory references to film and aerial combat, so don't worry! Sit back and put on the playlist, and get ready to "bring your daughter to the slaughter" (whatever that means) tomorrow on Beast in the Maze!