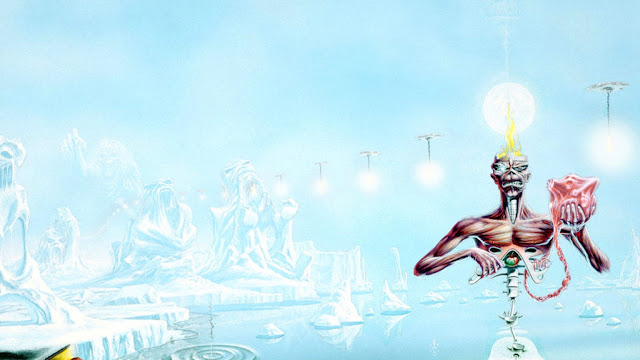 It's an exciting one this week on Beast in the Maze as we discuss a one-of-a-kind album in Iron Maiden's 1988 concept album Seventh Son of a Seventh Son. Based upon folk tales wherein the seventh son has special powers, the album takes on the theme of what happens to an innocent person when they're given power and fought over by both good and evil.
It also marks the completion of the sonic shift that Maiden began in their previous album, 1986's Somewhere in Time, where they first began to toy with synth guitar. On Seventh Son, Maiden brings actual keyboards into play - heresy, in the opinion of many metal fans - and they're not only present but often fairly front-and-center. Despite that though, the album contains some of the harder-hitting solos and musical sections of the Maiden catalogue up to that time.
This album represents Maiden at their most high-concept, progressive stage, just before the band gave way to their "low-brow" period in the 1990s with their next two albums, followed by the divisive Blaze Bayley period prior to the return of Bruce Dickinson and Adrian Smith.
Many of the tracks from Seventh Son are still considered Iron Maiden classics, including "Can I Play with Madness," "The Evil that Men Do," and "The Clairvoyant."
So join us as we get into the album, the concept, the artwork, and the tracks! We take on the sounds of the Eighties, the lives and deaths of the central character, and imaginary Pepsi commercials.
To find out more about the album, you can check out this playlist of the album, read about it on wikipedia (linked above), or of course listen to Beast in the Maze here or on your favorite podcast provider. We hope you enjoy!
Matt's live pick for this album is the title track from the album, "Seventh Son of a Seventh Son," recorded live in 1988, the same year of the album's release. It has the full stage package - lights, dry, ice, giant eddie, all of it. There's also a neat TV interview with members of the band explaining the concept of the album as well as some of the songs specifically which you might like.