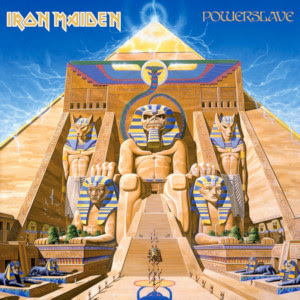 As we revealed in our second episode, next week Beast in the Maze will be discussing the iconic album Powerslave. The album is considered by many fans to be among the best, if not the best, of the golden age of Maiden and therefore one of their greatest albums of all time.
While we are happy to have people listen in any context, the discussion will make more sense having heard the album itself, and we strongly encourage our listeners to do so - especially when the album being considered is a classic of the genre. If you haven't taken a listen yet, here's a quick overview:
Powerslave came out in September of 1984 and involved an unprecedented world tour, with over 180 shows in less than a year. It has what many people consider to be the "classic" lineup of:
Vocals - Bruce Dickinson
Guitars - Adrian Smith and Dave Murray
Bass - Steve Harris
Drums - Nicko McBrain
This lineup began on the previous record and would continue for four consecutive albums before Adrian Smith's departure during the recording of No Prayer for the Dying. The album itself has won numerous accolades, achieving gold status in the UK and Germany, and platinum in the US and Canada.
About half of the songs on the album are still concert staples, including the iconic "Rime of the
Ancient Mariner," which is among their most noteworthy of epics. Every aspect of the band's talents are on full display here. It's a very rewarding listen by a band that is very sharp and in control.
The YouTube playlist of the album can be found here, and headphones are recommended for the full experience of the twin axe attack. There are also useful wikipedia articles about both the album and its accompanying tour. We hope everyone gives it a listen and enjoys it - we'll see you Monday 6/29/20 for our discussion of the album.