Iron Maiden live remasters, and gearing up for "Powerslave"

June 19, 2020
Hello everyone!
I just got back from picking up a copy of the newly remastered deluxe edition of Iron Maiden's Live After Death, widely considered the best live metal album of all time. While the podcast has yet to discuss this album itself, it was recorded during the World Slavery Tour, in support of the album Powerslave which we have coming up next Monday, June 29th.
If you've already listened to the album, or want to hear what Maiden would have sounded like in concert at around the time Powerslave came out, it's hard to beat Live After Death. Also, if you're sitting at home and looking for something to watch, there's live footage of the whole thing on YouTube (in fact, Iron Maiden's own YouTube channel is excellent, and contains all the albums as well as documentaries and bonus material).
While we will be discussing the tour on the podcast, our primary focus will be on the album itself, so I wanted to use this opportunity to drop some quick numbers from the tour. From tour manager Tony Wigens:
"... (the band and crew) traveled nearly 100,000 miles, used 7,778 hotel rooms, 6,392 guitar strings, 3,760 drum sticks, 3,008 guitar picks and consumed about 50,000 cans of beer, 30,000 soft drinks, 6,000 pints of milk, 2,500 pints of orange juice and literally tons of food. The equipment, all of which the band owns, was transported in six forty-five foot articulated trucks - all forty tons of it!"
Pretty epic! Anyway, I hope everyone listening to the album is enjoying it. I know we are psyched to discuss it on Episode 3. See you then. 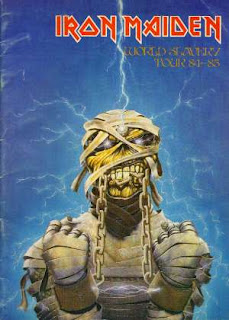