May 12, 2020
I had a little extra time this week so I thought I'd dig up some information on how long Iron Maiden and Phish's studio albums were for comparison. I made a couple of simple charts for visual purposes. Ranked longest to shortest, here's Iron Maiden: 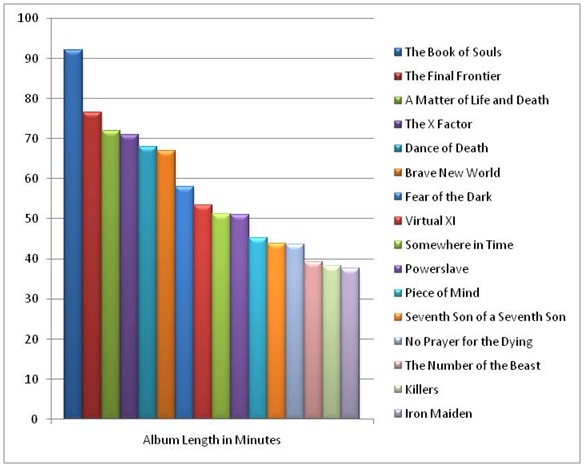 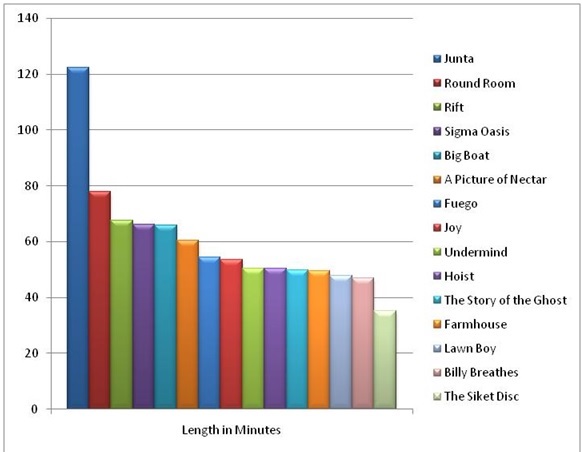 (It should be noted that these lengths reflect the original track list on the original releases and do not take into account any bonus material. So, for instance, many editions of The Number of the Beast since the remastering contain the added track "Total Eclipse." These sorts of changes in album length are not reflected here.)
So, a couple of key takeaways here, is that both bands' longest album isn't exactly a photo finish, with The Book of Souls a full fifteen minutes longer than the runner-up, The Final Frontier, and Phish's Junta coming in at over two hours, well ahead of their next longest record Round Room, which comes in at 77:51.
Before collecting this data, I felt intuitively that Phish's albums would be longer by a decent margin. Despite Iron Maiden's habitual inclusion of longer epic songs at the end of the album, much of the first half of their studio catalog clocks in at around 45:00 or less. Plus, extended jams that swell past the ten minute mark seem commonplace when you think about Phish as a band. However, I was surprised to learn that this doesn't necessarily bear out in the studio material. Here are some final conclusions:
Longest album: Junta (Phish) (122:25)
Shortest album: The Siket Disc (Phish) (35:12)
Longest average album length: Phish (59:56)
Shortest average album length: Iron Maiden (56:58)
A difference of slightly less than three minutes!
This will likely some day lead me down the rabbit hole of average song length, but right now that sounds like a lot of work! In the meantime, if you have any suggestions, questions, or ideas, feel free to leave a comment.